Alcatraz Island: prison, which has become a museum 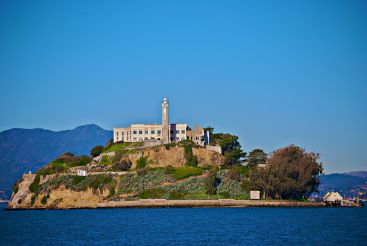 Alcatraz Island in San Francisco Bay has a very interesting history. Which was not only here: the fort, and the place of detention of prisoners of war, and maximum security institution, and a haven for hippies and Indians, and today - it's an interesting museum in the United States. Especially famous for the unique island prison, one of the most famous in history.

In the 30s the U.S. suffer from rampant crime, were overrun by gangsters. In these circumstances, the government decided to act very firmly: to create a special prison for the most dangerous criminals in the country. Alcatraz approached for this role perfectly: an isolated island, around - the bay with ice cold water and strong currents. In 1934, the prison began to take the first of criminals. It was determined the most dangerous criminals are not sentenced to death, as well as rebels and fugitives from other prisons. Among the most famous inhabitants of these walls - King gangster Al Capone, George Kelly Barnes, nicknamed "Machine Gun" thug Arthur Barker, Robert Stroud, nicknamed "The Birdman from Alcatraz."

Hard labor, solitary confinement punishment cells, "refrigerators" long "hours of silence" when it was impossible to talk, bans on visits and correspondence, vigilant supervision of guards, regular searches. Many prisoners went crazy here. And in the country did not know what was going on in the terrible dungeons, the press was not allowed on the island.

Prison existed for almost 30 years. It is believed that here was not committed any successful escape. Although it is known on 14 attempt to escape. However, one story in 1962 remains shrouded in mystery. Frank Morris and the Anglin brothers developed a cunning plan to escape and fled their casemates. The official version is no more of them alive or dead did not see missing. But we can not completely exclude the possibility that they still got to the shore and then somewhere "dissolved" on the big planet. Subsequently, the event served as a subject for the film "Escape from Alcatraz." Colorfully talk about prison and such famous Hollywood movies like "Train to Alcatraz," "The Rock" and others. Devoted to her and many documentaries and books.

In 1963 the prison was closed, as for detention on the island needed more costs than conventional mainland prisons, provisions had to be transported from San Francisco. After some time on the island of Indians lived and hippies. Fueled from their fires of the buildings were badly damaged. Then the U.S. government to address all the island's inhabitants were evicted, and in 1973 the island became a museum of the former prison.

Every year, this legendary territory visited by millions of tourists. You can visit the cells in the library, walk around the yard, where previously there were prisoners put on handcuffs or "sit on the benches." Audio guide tells about the history of the island and the prison known about the fate of the prisoners. You can buy souvenirs with views of the island, household prisoners.

Disneyland: A journey into a fairy tale

What could be more wonderful fairy tales? Where everything is possible, everything is real, all your dreams come true, and good always wins.

Named the top 10 attractions in Amsterdam

Each year, about 5 million tourists come to see the capital of the Netherlands. Amsterdam is one of the most beautiful tourist destinations.

If you want to plunge into antiquity ceduyu in alluring world of bygone eras - come to Athens!
Feedback