Ireland – a paradise for those who are fond of equine tourism 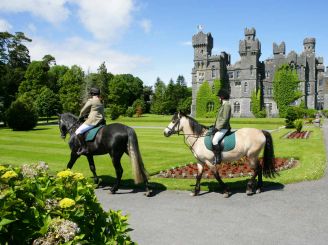 Though Ireland can’t be named as a motherland of horse racing, equestrian sport is highly developed here. There are more than 20 racecourses on the territory of the island as well as a huge number of private stud farms. But the real champions are brought up on the territory of the Irish National Stud, which is situated in County Kildare.

Its history started in 1900 when Colonel William Hall Walker decided to breed horses. His business was quite prosperous and in 1917 he decided to present his stud farm to the British royal family.

Today, the stud farm occupies the area of about 400 ha. A lot of world champions are bred here. Irish thoroughbred racehorses are bred and trained here; secrets and tricks of horse breeding are taught here as well. The territory of the farm is always open for visitors and tourists. During excursions you can see with your own eyes how professional and skilled riders train horses. At the saddle shop, special saddles featured for each horse are made. A farm smithy, where all the horses are shod is worth visiting, too.

The excursion can follow to the Horse Museum, which is situated in the old stables. Its exhibits tell a lot about the past, present and future of the horse breeding industry in Ireland. Its most famous exhibit is the skeleton of Arkle – the horse who’s been the champion of a great number of world racings, including Cheltenham Gold Cup.

You are advised to plan your trip to Ireland when horse racing and festivals takes place, which are usually held at the ancient racecourse The Curragh. Racing season usually starts in May, and Guineas Spring Racing Festival opens it. This event attracts the audience of different kind: professionals, enthusiasts, fun lovers and even fashion lovers. Then the season is continued with spectacular competitions of The Dubai Duty Free Irish Derby. In the middle of summer, the classical racing of The Darley Irish Oaks is held at the racecourse. The season is ended with the traditional Irish Champions Weekend.

The Curragh Racecourse is situated only 50 km from Dublin. To get there by car you should follow E20 road towards Newbridge.

Bruges: A Trip to the Middle Ages

Have you seen the movie In Bruges? Or maybe you’ve read about this town in the books of famous Georges Rodenbach, a Belgian Symbolist, poet and novelist.

To the mountains for real Bergkäse

Switzerland has always been famous for its cheese. The country produces more than 400 kinds of delicious cheese admired by millions of people across the world. The formula for its success is in the alpine mountain pastures.
Feedback