Ronda – a journey over the precipice 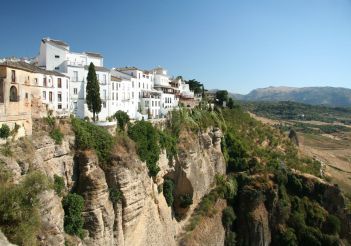 Being famous for its wide sand beaches and warm sea, Spain has always been a beloved destination of tourists from all over the world. But it’s not the only image the country can boast of. There’s another face of it – deep gorges, cliffs and sky-high peaks. Hundred kilometres from Malaga, which is a cultural centre of Andalusia, a fantastic town can be found. It stands at the very edge of the precipice. Ronda is one of the most amazing places in Spain. It is often referred to as the soul of Andalusia. Tourists can stay at comfortable suits in an ancient villa and enjoy beautiful sceneries every single day while living there.

For many centuries, the town has occupied the top of a hill, 723 metres above sea level. A deep canyon divides it into two parts connected with each other by a magnificent bridge – the greatest attractions of Ronda. New Bridge was built in the middle of the 18th century in the deepest point of Tajo Canyon. The bridge is 98 metres high and the stones for its building were taken right from the bottom of the canyon. There are some spaces in the central part of the bridge, where the prisoners were kept in past times. Now it is a museum. From the view points of this museum tourists can take wonderful pictures of the canyon and the mountain river. Besides, not far from New Bridge another two bridges can be seen. One of them was built in the 17th century, the other – much earlier, under Roman rule.

Ciudad Vieja (the old town of Ronda) will be especially interesting for tourists. Some buildings dated by the 13th century when Ronda was inhabited by Arabs can be found here. Narrow streets still keep the atmosphere of a medieval town. Tourists should also visit Puerta de Almocábar and Baños Arabes.

The old town is famous for its ancient monasteries, palaces, museums and beautiful buildings. St Mary Church built in the 13th century is situated there too. El Mercadillo is a contemporary part of the town in spite of the fact that a lot of its buildings have elements of the Baroque style. A great number of stores and souvenir shops are situated in this part of the town.

The town will be also interesting for those who are fond of bright shows, as Ronda is a motherland of bullfights. Plaza de toros de Ronda is one of the oldest and the biggest bullfight arenas. A lot of historians believe that the first bullfight was performed right here. By the way, world famous bullfighter Pedro Romero who fought more than five thousand bulls also performed on this stage. In outbuildings of Plaza de toros de Ronda, there’s a museum dedicated to the history of corrida.

You can easily get to Ronda from Malaga or Seville by bus, which goes there every day.

London is one of the oldest cities in the world. It steeped in more than 2000 years of history enduring much. It used to be the capital of the strongest and most powerful Empire of the world.

Cornwall is a Favourite Family Retreat

County Cornwall is located in the south-west of England and is a favourite destination of many families.

Holidays in the castles of Europe - Feel like a king

Two centuries ago to live in castles only kings and their families and members of the nobility. And today, the royal stay available to everyone. You can choose to stay in a luxury apartment in almost any European castle.
Feedback