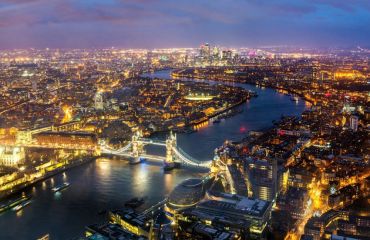 The most unusual and incomparable acquaintance with London can be made from the bird’s-eye view. Discover the ancient city from the upper floors of skyscrapers and the huge metropolis will be plainly visible. It is a unique experience – you won’t get it on the ground.

The history of London skyscrapers began in the 11th century, when the 27 metre high White Tower was built. Since the late 19th century there were restrictions on the height of buildings. Since the 1960s, they were relaxed and new skyscrapers appeared in the British capital. However, even today strict rules concerning all architectural projects in the capital are in effect. That’s why you won’t find many skyscrapers in London, but they all are unique and impress with their immensity.
The highest viewing platform of the city, the second tallest building in Europe is the 310-metre high Shard, located on the bank of the Thames. 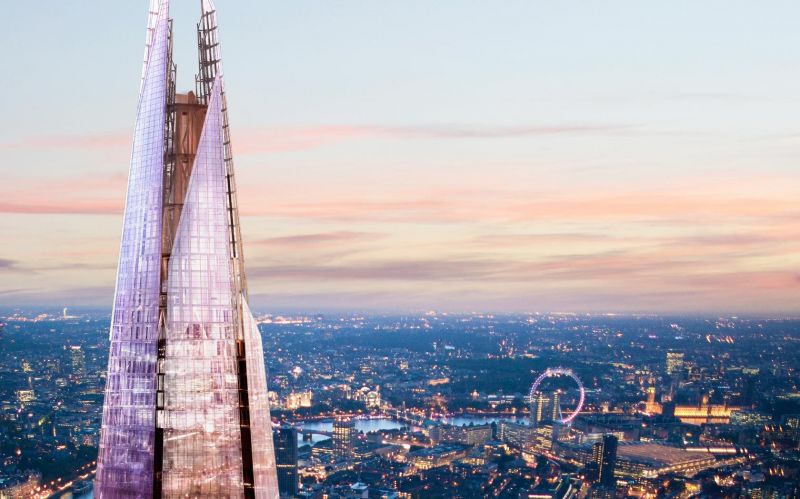 It is a complex of apartments, offices and restaurants, with shining sun glass panels. The temperature at the top of it is a few degrees lower than the temperature on the streets of London. The viewing platforms are organised on the 68th, 69th and 72nd floors. St Paul’s Cathedral, Tower of London, the Thames, Tower Bridge, Big Ben, the Gherkin, Westminster Palace, Buckingham Palace, Olympic Stadium and other attractions are well visible from there. 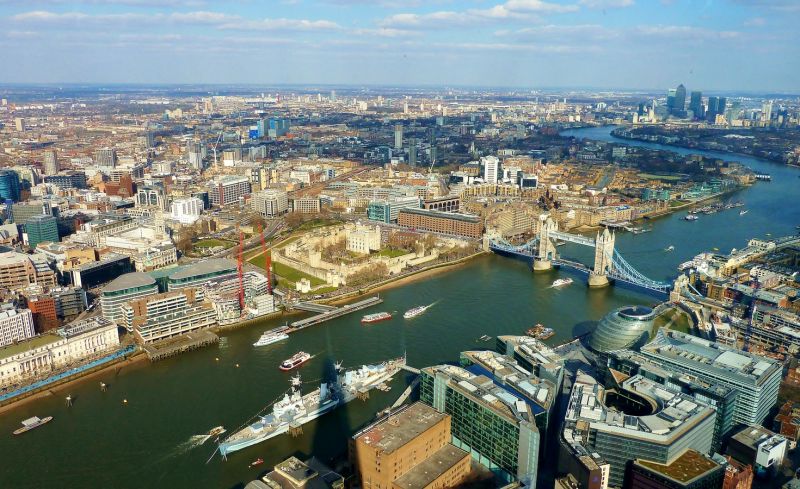 Telescopes can magnify images of objects. Information regarding London attractions is also available. The time you can spend on the viewing platform of the Shard is unlimited during the day. Weather guarantee included. You are advised to book tickets in advance, in this case the cost is about £ 25. If you purchase the ticked on the day of visiting, it costs £ 30. Discounts for children are available.
The beauty of London can be experienced from capsules of the giant Ferris wheel of 135 metres high. The London Eye stands on the banks of the Thames. 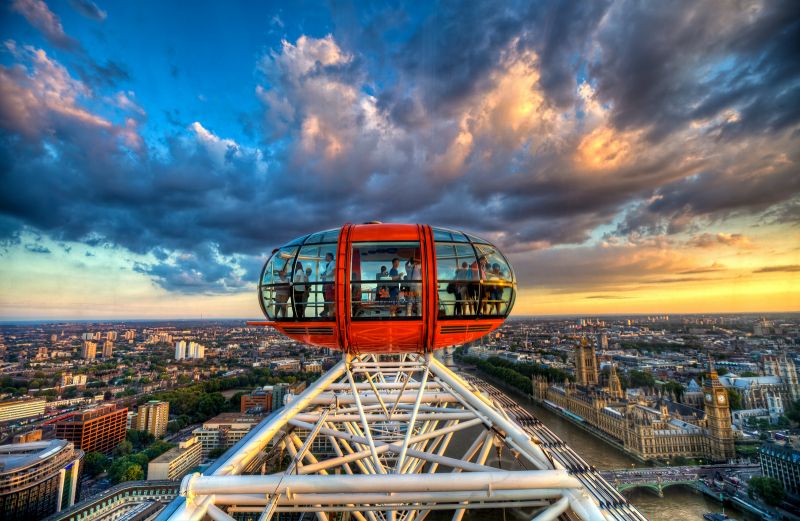 Each capsule is designed for 25 people, and has an air conditioning system. On a clear day, it offers fantastic views on Westminster Palace, Big Ben, Westminster Abbey, St Paul’s Cathedral, Covent Garden, Hyde Park, the River Thames. In addition, brief information about these destinations is available for visitors. Romantic couples can take a private capsule with champagne. Between June and August, the wheel is open from 10am till 9:30pm, on Fridays – till 11:30pm. A trip takes 30 minutes. The nearest underground stations are Westminster or Waterloo. The cheapest ticket for an adult costs nearly £ 18 if purchased in advance at the official website. Depending on time, capsule type and included services, the trip can cost up to £ 500 and more.
The romantic cable car Emirates Air Line passes over the Thames. 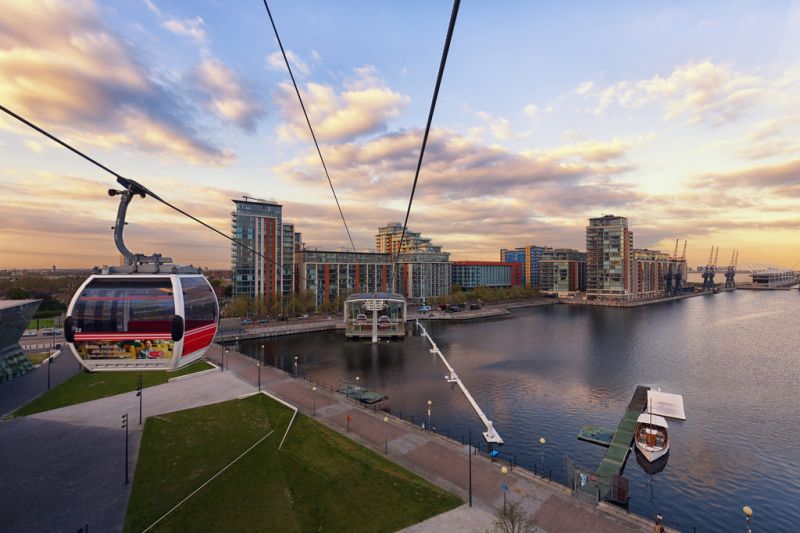 From its gondolas, Canary Wharf, the O2 Arena, and in clear weather London City Airport are seen. North Greenwich and Royal Victoria are the nearest underground stations. 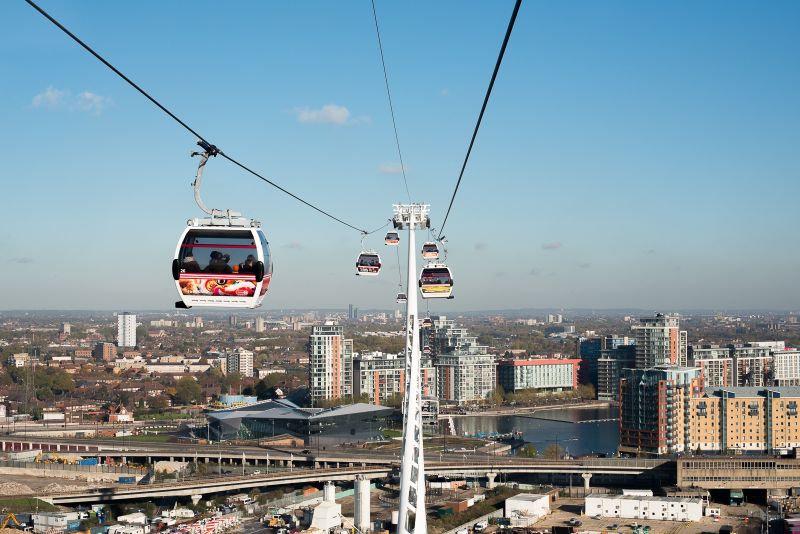 On weekdays, the cable car is open from 7am to 9pm (April – September), from October to March – up to 8pm. At weekends, it is open for an hour or two later. One way fare for an adult is £ 4.40, for a child – £ 2.30. When using Oyster card, which operates for all modes of transport in London, the trip will be cheaper. Emirates Air Line can be found on the map of the underground system of London, so it won’t be hard to get to it.
Great view of London is opened from the 180-metre-high Mary Axe Tower, often referred to as the Gherkin for the green colour of its glass panels and the whole appearance. Unfortunately, the entrance is accessible only for employees of the Gherkin. 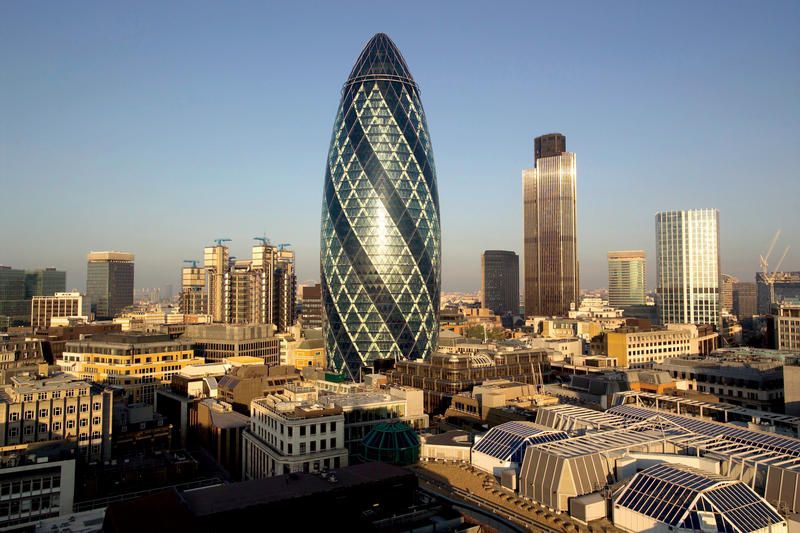 Or you need a special permission to visit it. However, there is another great option to enjoy London attractions and have a tasty meal at one time. For this you should visit one of restaurants located in Heron Tower, 230 metres high. 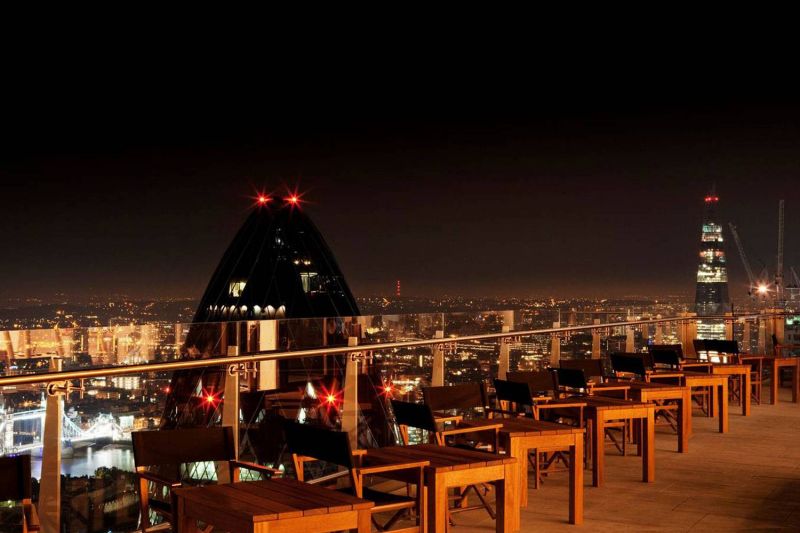 Naturally, it is better to visit skyscrapers of London on a clear day, so the fog wouldn’t hinder your sightseeing. Also, you can watch London attractions from a helicopter.
View translation
Originals are available
in such languages:

Walk around Lisbon and its surroundings

Do you want to plunge into the world of exciting marine adventure world of romance and discovery? Then we invite you to Lisbon, is the main port and capital of Portugal.

Bright Zhemchuzhny the Côte d'Azur in France, Nice for centuries remained a beautiful city that has inspired poets and artists, composers and writers.

Street food and top 5 cities where you can taste it

For many tourists, visiting fancy restaurants is a rarity. Due to the lack of time they are often forced eating standing up.
Feedback