By melting snows of Kilimanjaro 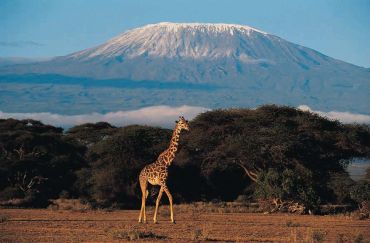 Africa is full of secrets and mysteries. On its territory there are some of the largest carnivorous animals, as well as poisonous snakes and spiders. There are dangerous and extensive desert and, finally, in these places can be found tribes living far from civilization. Southern continent never ceases to amaze us, civilized people accustomed to comfort and all sorts of innovations in science and technology, their originality and exoticism. So Africa is so popular among travelers who come here in search of new experiences and exciting adventures.

Small Tanzanian town of Moshi - Centre of African mountaineering, it will start here numerous expeditions to the legendary mountain. Moshi situated at the foot of Mount Kilimanjaro, poets sung dozens of times-giving inspiration to painters, filmmakers and animators. By the way, in the town of everything that can be named, is named after the mountain. Buses, clothes, chocolate, tea, coffee, water and even beer - all the "Kilimanjaro".

Often the mountain called the "roof of Africa", its snow cap visible in a radius of 200 kilometers. It is a symbol of Africa, the continent's business card. The road from Moshi to Kilimanjaro takes less than an hour. Overcoming the distance, travelers are on lands of the National Park of Tanzania, who is also named after the mountain. Kilimanjaro in the park, in natural conditions live a great number of buffalo, antelope, giraffes, elephants, lions, tigers, jaguars, hyenas and other animals. Annually on a photo safari in the African savannah thousands of tourists come. Here they are attracted to the unique opportunity to observe the life of exotic animals directly driving the car at a distance of several meters.

Many travelers do not dare to climb the highest mountain in Africa. But those who overcome their fear and come to the top, will be awarded hundred times, surviving an unforgettable experience. "Roof of Africa" ​​is located in the north-eastern Tanzania, in three degrees of the equator. The height is 895 meters 5000, although it consists of three peaks: Kibo - the main and the highest, to the east of it - Mawenzi, and to the west - the Shire.

Kilimanjaro - it is a dormant volcano, the landscape is formed over millions of years. Locals believe that the slopes of the mountains are a haven for the souls of the dead. A tribe of Indians, who lives at the foot of the mountain, its supreme gods worshiped. Indians believe that the deities live on a mountain top and guide the world from there. By the way, the Indians are many legends about the mountain. And the most common tells that Kilimanjaro lives an evil spirit, who carefully guards her. Spirit does not let the sacred summit weak, banishing them frosts and hurricane-force winds. This is partly true. Kilimanjaro is not just a mountain, it often shows travelers its capricious nature, testing the strength and willpower. So without an experienced guide can not do.

Total on the mountain for tourists are available seven trails. The ascent begins with dense rainforest, the beginning of the path is more like a normal walk. But with changes in elevation, tourists feel and strong changes in the load. Climb to the top takes 3 to 7 days. Reliable trekking thought so that the dawn must meet tourists on top. This is a fantastic spectacle that never forget. A huge red sun rising over the horizon, casting a shadow on the mountain clouds swirling below. Beauty of the world and delight overwhelms everyone who is in this magic hour on top of the most amazing mountains, snow, which are among the hot sands of Africa.

A two hour’s drive from Munich and you are at the wonderful place, where fairy tale and real life have been interweaved. For many years, the Alpine village of Oberammergau has been famous for its incredible frescoed houses.

Travelling with taste: barbecue of the world

Wrocław is a beautiful quiet town which stands on the green banks of the Oder River. It attracts tourists not only with its medieval sites, fantastic bridges (there are more than 200 of them here), but also with small modern figurines of dwarfs.
Feedback