Top 5 Most Unique Festivals in the World 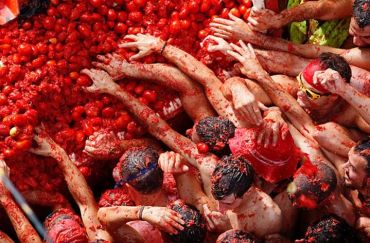 Hundreds of festivals are held around the world every year. They are arranged in honour of patrons, the gods, seasonal changes or historical events. However, there are festivals that stand out for their originality and entertainment, even among such diversity.

Thus, the Festival au Desert in Mali is the most remote music festival in the world. It takes 3 days of travelling on camels in the Sahara desert to get to the venue place. This is the only festival in the world featuring Tuareg culture, a nationality that resides in Mali. The program includes performances of Tuareg musicians, dancing, fencing and even camel racing. Performances take place on sand, with no sound equipment under the light of torches and fires. There are no hotels there. The Festival guests live in tents of hospitable Tuareg.

But the most scaring festival is considered the Night of Witches in Mexico. The traditions of this unique holiday go back to the past, when the first legends of shamans, healers, magicians and sorcerers were born. Every year the festival is celebrated on the same day – the first Friday of March. Hundreds of shamans, witches, fortune tellers and healers come at night to the small Mexican town Cerro Mono Blanco. Also, this place attracts fans of alternative medicine to be cleaned of negativity, buy an amulet, a totem or a magical potion. The "capital" of witchcraft has a place for a cure of every curse.

The Naghol Male Festival in the tiny Republic of Vanuatu is considered the most dangerous. The country residents believe that a man must undergo terrible life tests before he can choose a bride. If a young man has passed the test of a bungee, he becomes a man and a valued member of society. Naghol is a deadly ritual and a wooden pedestal of 30 meters height is built in the jungle to hold the festival. A boy climbs the pedestal, ties up his ankles with liana attached to the top of the nearest tree and… take a step into nowhere. The liana’s length leaves only a few centimetres to the ground, so the test is not taken by many. After all, liana may not withstand such a load...

The crazy Cooper's Hill Cheese Rolling Festival is annually held on the last Monday of May at Cooper's Hill in Cheltenham, a region in England. That day, truly strange and unusual actions take place on the hill. People gather at the top of Cooper's Hill and divide into small groups. A cheese head is put down in front of them and they roll down a steep hill, trying to catch up with cheese. The descent from Cooper's Hill is very steep, the speed of cheese head can reach 112 km/h, therefore the festival participants are often taken to the emergency. But those who survived and came to finish first, receive the cheese, the one they fought for.

The prolonged Fiesta de Santo Tomas is held in Chichicastenango, Guatemala. St Thomas is the patron of the city, and parades, costume parades, dancing and fireworks are held in his honour. Within the whole week, from December 13 to 21, residents of Guatemala are having fun from the heart. On the last day of the fiesta men climb the wooden pole of 30 meters height. The pole rotates around its axis and dramatically changes the height. Those who are brave tie their hands or feet to the pole, often taking a risk of their lives to prove their bravery. And the winner can choose any girl he likes as his bride.

The above mentioned festivals are those five ones that attract millions of tourists who want not just to see the bizarre ritual, but also to take part in it.

Word of Singapore for many fanned Wrath amazingly beautiful tropical paradise. This island city-state, belongs to the twenty smallest countries in the world.

How to Plan the Ultimate One-Week Trip to Italy

This amazing country is the birthplace of Santa Claus, the Snow Queen, dwarves, elves and reindeer. Therefore, both adults and children come to Lapland in anticipation of Christmas miracles and magic.
Feedback