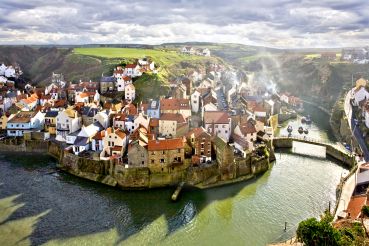 The most prestigious award of the tourism industry «World Travel Awards» British Yorkshire awarded as the best destination in Europe in 2013. Yorkshire beat much more famous contenders - London, Berlin and Madrid. The award, which is called the "Oscar in the field of travel", awarded for 17 years and this is the first time that became the winner in the direction that is not world famous.

Yorkshire - a historic county in the north of the UK. There are high mountains, fertile land and interesting cities. In Leeds, tourists can see one of the richest world collections of arms and armor. Art lovers will appreciate a visit to Leeds City Gallery, where a collection of sculptures by Henry Moore. Arriving in the city, you should definitely see Harewood Palace, the ruins of the abbey and Kirkstalskogo original Town Hall of the 20th century. Leeds and known breeding two breeds: Yorkshire Terrier and Airedale.

Wondering where was imprisoned Mary Queen of Scots? Then you road in Sheffield, to the ruins of the castle of the 13th century. It is interesting to look at the castle and the Duke of Norfolk, visit the Museum of Fine Arts, and City Museum of Antiquities. Not remain indifferent and football fans. After Sheffield is the oldest football club in the world, founded in 1857.

One of the most important cities in England York to this day surrounded by the ancient walls of the 14th century. And there was this city in the 1st century AD on the basis of the Roman fortress Eborak. There are well preserved ancient Cathedral and the Museum of merchants and adventurers of the 14th century. Street with houses Shemblz 15-16 century takes you into the past of the ancient York, and walks along the River Ouse to help better understand and feel this wonderful English city. Another interesting fact: New York is the birthplace of Robinson Crusoe by Daniel Defoe's famous works.

There is an onsite Yorkshire and ancient castles. History Helmsley castle began in 1120 with a wooden fort. During the English Revolution ensconced in the castle three months Royalist supporters besieged Cromwell. Scarborough Castle built around 1130 and is mentioned in the sagas of the Vikings. During World War II it was badly damaged by German bombing.

Yorkshire Sculpture Park - the largest outdoor art gallery in England. This is quite typical English village where contemporary art is demonstrated on the nature background. Imposingly stroll through the grass geese, herons flounder in the lake.

English charm and variety of attractive routes makes Yorkshire very popular among tourists. Every year it is visited by millions of people.

Eisriesenwelt – Gates to Hell or the Kingdom of Ice Giants

Austria has always been famous for its wonders: medieval castles, luxury palaces, parks… But only a few people know that the world’s largest ice cave is situated here in the Alps. Underground corridors of the Eisriesenwelt go inside the mountain range for

Budapest - Pearl of the Danube

Amazingly beautiful city in which architecture intertwined many different styles: Gothic, Baroque, Classicism, Modernism. The endless war and invasion, destruction and reconstruction have created the modern look of Budapest.
Feedback