Some Reasons to Visit Greece 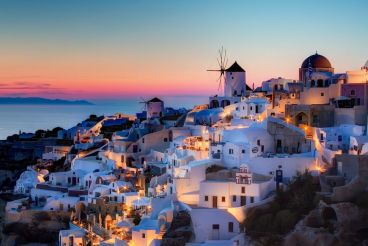 Greece is an amazing country indeed. It is the motherland of myths and exact sciences. It is also one of the world’s famous resorts. It has so many sights on its territory, like no other country on our planet. You’ll need several years to study all of them.

First of all, Greece attracts visitors with its historical places and picturesque landscapes. Here you can find any scenery you like: virgin woods of the mainland, fantastic islands, mysterious grottoes, azure bays, snow peaks, gold sand beaches, and vast plains. It’s better to arrange your journey for May or September, as summer temperatures are rather high here – up to 50°, winter months are quite rainy.

Crete is the biggest island in Greece. In total, there are about two thousand of islands which belong to the country. Crete’s coastline is the longest one as well, it stretches on more than a thousand kilometres. This is a place where the most ancient human civilization – Minoan – was born. Crete is not only the biggest Greek island but also the most economically developed one. It is often referred to as the world’s tourism centre. More than 2.5 million people annually visit this place due to the perfect tourist infrastructure, numerous places of interest, warm and pure sea. Crete is also the cultural centre of Greece, where its unique traditions, cuisine, music and dances are kept with great honour. Greeks are very hospitable people. Wed day parties often become town festivals here and even a casual man passing by the party is always invited to take part in the celebration.

Greece is a country with unique historical heritage. Its territory is considered to be the cradle of Occidental civilization. A lot of architectural and historical monuments have been preserved here – one trip is not enough to see all of them. Palace of Minos, The Temple of Olympian Zeus, Agiou Pavlou Monastery, The Erechtheion, holy mount Athos – this is only a short list of wonderful places of ancient Greece. But the main symbol of Greece is The Parthenon, an ancient temple which has been perfectly saved till present days. It rises up above the ancient town Acropolis, standing on the highest point of it and being surrounded by fifty marble columns.

Every part of Greece is fulfilled with national history and the history of ancient civilizations. You can feel this spirit on the Peloponnese peninsula. This is the place where Greeks prefer to spend their holidays. The ancient state Olympia was situated here long time ago. Olympia is the birthplace of the Olympic Games. The huge stadium, where the first athletes of Ancient Greece used to train, has been preserved here till present days.

The traditional cuisine where vegetables, fish and seafood prevail can satisfy all tastes. By the way, Greeks are very attentive hosts, so travellers will also have a chance to taste and enjoy the local meals not only in fashionable cafes, but in a casual village tavern, as well.

Each country attracts tourists not only with its unique destinations, but also traditions, where religious ones hold a special place. For two thousand years now, Christians around the world have celebrated The Resurrection of Christ.

A Quiet Rest in the Italian Countryside

For a long time, Italy has been a beloved destination for all the tourists due to its medieval architecture, splendid towns and cities, delightful cuisine and bright carnivals. But, there’s also another side of Italian life – its countryside.
Feedback