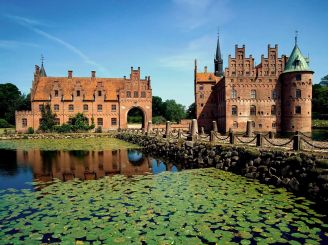 First of all, we know Denmark as the birthplace of the great storyteller Hans Christian Andersen. His Mermaid has become a symbol of the whole country, as the Eiffel Tower or the Statue of Liberty. We also know as the birthplace of Denmark genius physicist Niels Bohr and Shakespeare's Hamlet, Prince of Denmark. Maybe someone else remembers modern filmmaker Lars von Trier. However, we forget that the small Kingdom of Denmark is a world leader and champion in many areas of life.

For example, the Danish flag Dannebrog - the world's first national flag, it more than 700 years. Officially, his story begins in the 14th century. Thus, the state symbol, despite its venerable age, changed only once, and then not much. In its upper left corner for a few hundred years, there are three crowns. However, after disconnecting the conquered territories Dannebrog regained its original appearance.

In the heroic history of Denmark was a time when a tiny country had simultaneously Norway, England, Sweden and Finland. Today Denmark owns the world's largest island - Greenland. Tourists love it for the stunning snowy landscapes. Only here you can see the amazing in its form glaciers, snow-white snowdrifts ride on a dog sled, and finally, only here you can see near the sea giants - whales with calves, carefree sailing past the shores of this unique island.

Next record - Danish royal family is considered the oldest on earth, she is already 600 years old. This means that 600 years on Danish soil was neither revolutions nor coups. Of course, this fact is reflected in the nature of the Danes, who are considered the most peace-loving and friendly people. So if you're a bit lost, walking through the streets of the Danish capital, boldly seek the help of passers-by. You are sure to help, prompt and hold to the right place.

In Copenhagen , capital of Denmark, is the official residence of the royal family. Amalienborg Castle - the pride of the country, live and work here serving Queen Margrethe II and his family. Pleased that the apartments of the castle is open to visitors. So tourists can witness the private quarters of the royal family of the 18th and 19th century luxuries perfectly preserved: the golden candlesticks, mirrors, carved oak furniture, crystal chandeliers and tapestries. Although the royal chambers can be seen only partially, at noon at the entrance of the crowd going curious to see how the change of the royal guard of honor. This is the most favorite spectacle of millions of tourists and photos with the royal guards in the post - an indispensable attribute of a trip to Denmark.

The surroundings of Copenhagen is Frederiksborg Castle , received for its beauty and splendor nicknamed "Versailles of the North". This is one of the most amazing castles in Europe, it is located on small islands connected by picturesque bridges. Neighborhood decorates a beautiful park, a favorite place for walking and recreation for residents and visitors to Denmark. Over the centuries of its existence in the palace accumulated so many unique items that today it has become a museum of national history. In the halls of his exposition on the history of the state, since 1580.

Bergen - the birthplace of the fjords

The magazine «National Geographic», authoritative international edition in travel, I decided to find out which corner of the earth can be described as the most beautiful. The competition is 115 best hiking trails.

Where to spend the day snowboarding World