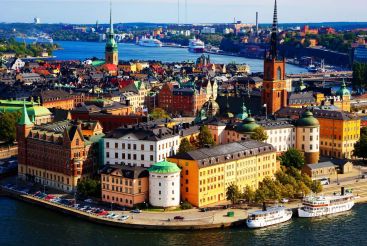 One of the most beautiful cities in the world located on 14 islands connected by numerous bridges. It is the capital of Sweden - Stockholm . Get into the main city of the country can be on the water. Ferries here - quite a popular form of transport. They not only take you to the right place, but will also give the opportunity to enjoy the picturesque scenery. Floating on the ferry, you can watch the green rocky shores and berths for luxury yachts.

As soon as the Swedes did not call their capital: handsome and on the water, and the Venice of the North. But the modern name of Stockholm accurately reflect geographical location, which means "island, wooded." Much of the city is occupied by green space, you can see many beautiful parks. Stockholm surprising abundance of water. It stands on 14 islands and the presence of water is constantly felt. Although probably all agree that this amazing city is famous primarily for its architecture.

Gamla Stan - it's an old part of the city. The first buildings appeared on its territory in the 13th century. Gamla Stan occupies 36 hectares of land and is located entirely on the island, there are no cars, no modern buildings. A bit of wandering around the old town, you get to the tiny street with a width of 70 centimeters. Morten Trotziga Lane - is a tourist mecca of Stockholm and the smallest street of the capital. If you walk on the pavement it can travel back in time and be in the middle ages!

Swedes today like to live in the old part of Stockholm, they do not fear even the lack of public transport. Stortorget Square - the center of Gamla Stan and the oldest part of it. Previously, it took people's congresses, and now here is the Nobel Museum .

If you want to remember long journey through Gamla Stan, then for you mandatory program: drink a cup of coffee on Stortorget Square, wander through the tiny medieval streets and at least once to get lost to find the hero of an old Swedish tale - Nils Holgersson, who went to a wonderful journey with the wild geese. Looking at his small monument, it seems that the boy just sat down to rest for a moment, and then go on a long journey. According to an old tradition of tourism figure Niels need a pat on the head, put next few sweets or a coin and make a wish. Collected from the monument to the nearby church give money and sweets - children.

Stockholm Royal Palace stands on the border of Gamla Stan and the modern part of the Swedish capital. In this palace kings live nearly 1,000 years, and it is a treasure trove of underground rooms with unique heirlooms of the royal family, to allow collection and tour groups.

Street or Queen Christina "street with flags" - a shopping center of the capital. Incidentally, postcards depicting the royal family - the most popular items in the country, because the Swedish subjects relate to their monarchs with exceptional warmth. Street stores entice passers incredible discounts, sales, and unique offerings. Quite a few here and boutiques with design innovations.

Excursions by bike or lovers, lovers of art, music, design, and those who are simply interested in photography - all can be found in this city something special that will remain in the heart forever!

Austria is a cosy country situated in the very heart of Europe, at the foot of the majestic Alps. The country location secures its image of the best ski resorts land.

Ireland – a paradise for those who are fond of equine tourism

Though Ireland can’t be named as a motherland of horse racing, equestrian sport is highly developed here.

Summer is over, but that's no reason to be sad. On the contrary, in front of the velvet season - a time when the sun does not burn its rays, when the water is still warm and the sea with a fresh breeze blowing. The fall of many of the world resorts ar
Feedback