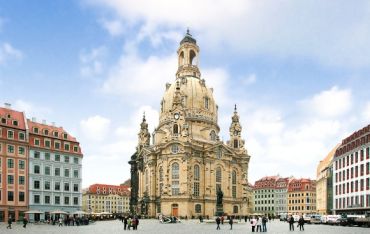 For Dresden historically stuck two informal names. In the city as scenic spots and beautiful monuments of Baroque architecture that it has long been called the "Florence on the Elbe". It was built as a royal residence, as the capital of the Kingdom of Saxony - the state that existed on the territory of modern Germany in 1806 - 1918 years. Its rulers showed great interest in the culture, art and care about a city. This was particularly characteristic of the so-called "Augustinian era", when Augustus the Strong of Saxony led and his son Frederick Augustus II. Then in Dresden and was built most of the architectural masterpieces.

The second characteristic definition - "risen from the ruins." During the Second World War, in 1945 the city was bombed by U.S. aircraft and the UK. Architectural monuments turned into a pile of rubble. Restoration of the historic center with the support of patrons of more than two dozen countries, including the U.S. and the UK, has been going on for over 60 years. Miracle occurred - unable to return to its former splendor!

Delights palace ensemble Zwinger . This masterpiece of the late Baroque. Zwinger Palace was built in the early 18th century by order of Augustus the Strong, and was intended for ceremonial meetings of the court nobility, of knightly tournaments, theatrical performances. Pavilions of different forms, galleries, courtyard with fountains, Arc de Triomphe, the dome with gold, sculptures of heroes myths of ancient Greece, luxury staircases leading to the terrace. The apartment is renowned Zwinger Art Gallery with the famous "Sistine Madonna" by Raphael, Rembrandt paintings from Titian, Durer, Rubens.

Charms Lutheran Church Baroque Frauenkirche . It was built in the first half of the 18th century by architect George Ber. And at the beginning of the 21st century has been recreated using modern technology. Semper Opera House - one of the most beautiful opera houses in the world. Architect Gottfried Semper built this building in 1838-1841, respectively. It is distinguished by the elegance of architecture and wonderful acoustics. The lobby and rooms are decorated with paintings and rich ornaments. Semper Opera House is a concert hall Saxon Chapel - Symphony Orchestra of Dresden. Today it is one of the oldest symphony orchestras in the world, founded back in 1548.

Admire Dresden Castle, residence , in which architecture can be easily traced back to a variety of different styles. It was built in the 12th or 13th century, was rebuilt several times. Today there are "Green Vault" - the richest collection of jewels and Armoury - collection of costumes and weapons. Attracts many tourists Bruhl Terrace . It is half a kilometer outstanding architecture over the Elbe promenade in the center of the old part of town. Here you can enjoy long scenic views of the river.

Palace Church - a big building, built in the mid 18th century sandstone. Temple is lavishly decorated with numerous sculptures of the apostles and saints. If you go into the church, you can see the beautifully decorated altar gallery for church processions, and a huge body of world famous master Gottfried Silbermann.

New town hall in neo-Renaissance style with a five-meter Golden Hercules on top of the dome, Loshvitsky suspension bridge (or bridge "Blue Wonder") - the original architect's idea of yore.

For those who do not believe in fairy tales, it is necessary to go to Venice. To those who believe - even more so. This city - a beautiful fairy tale, to become a reality. At the very name of his enchanting sound of the string magic.

The Brazilian city of Rio de Janeiro incredibly scenic and very green. Looking at it from the coast, it seems that the city is literally carved in a lush tropical forest.
Feedback