Moravia – the Country of Brewers and Ancient Castles 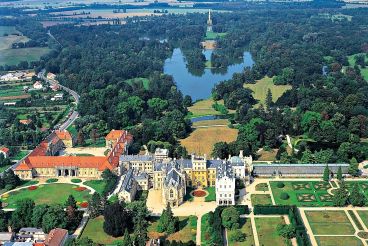 Nobody knows who divided natural resources among the countries, but what is clear, he did it unfairly. Some countries got everything and some countries got almost nothing. Czech Republic is among those countries which are known not only for their capital cities. Wonderful sceneries and pristine nature are the main secret of success of this country.

If you plan to visit Prague soon, don’t miss a chance to devote one or two days to see Moravia region, which is full of nature wonders. Dense beech forests, small villages, numerous clock towers, old churches, and quiet lakes and rivers are situated there. That’s why the best way of travelling here is by bike or by car, to have an opportunity to stop somewhere and to enjoy the beauty surrounding you. Besides, it’s a great pleasure to drive on the Czech roads. Out of the towns, the roads are wide and plane, the roadsides are well equipped with road signs which help drivers to follow their way and not to get lost.

First of all, South Moravia is a wine region. Special wine routes were made for tourists here. They go through endless vineyards, wine cellars, cosy hotels and nice restaurants with traditional cuisine. Cycle tourists love these routes most of all, in spite of the fact that for the first sight bikes and wine are two completely different things.

Moravia is famous for its brewing traditions which are more than a hundred years old. That’s why lots of breweries were turned into museums which warmly host their visitors. For example, an old Czech factory Krušovice holds the excursions on its territory constantly. So, during your visit you can not only see the process of beer creation there, but to visit their brand taste hall. In the hall, the visitors can taste the best and the newest kinds of beer, produced here. Don’t miss a chance to taste fresh appetite beer brewed right there. Even if you’re not a big beer fan, you’ll change your attitude to this drink after this visit. Besides the traditional beer kinds, a lot of exotic ones are offered here: with a coffee, cranberry, banana, cherry, plum and even champagne taste.

But don’t get to much involved in the tasting process, unless you’ll miss a lot of interesting things. A great number of places of interest are situated in Moravia – medieval temples, cathedrals and churches. Most of them were built in 13th – 14th centuries. The most significant one is Usov Castle, which contains a unique collection of weapon. Šternberk Castle with its collection of antique furniture and paintings is also worth visiting. Gothic Bouzov Castle has been preserved perfectly, so it’s often used for historic films shooting.

If you’re short of time and you don’t have enough time for finding the castles which are situated in various parts of the region, you’d better go to the main tourist centres of the province – to the towns of Olomouc and Kroměříž. An incredible number of sights is located within these areas. These towns are often referred to as “an open air museums”. Visit the Holy Trinity Column, Saint Wenceslas Cathedral, Arcidiecézní muzeum, Kroměříž Archbishop's Palace and many other places of interest.

In summer time a lot of music contests and theatrical performances take place in Brno, the capital of Moravia. One of the most popular festivals is an international Starobrno-Ignis Brunensis fireworks parade. It is an unforgettable action which lasts for two weeks. A lot of tourists come to see it every year. It’s no wonder, because the best shows from all over the world are awarded here.

There are lots of places in the world where ancient civilizations’ monuments have remained till present days.

Oslo - the first provincial capital of the world

Norway - a small cozy country, which has spread its open spaces immediately along three seas - the North, Barents and Norwegian. Most often, the word Norway tourists imagine the majestic nature of the fjords and snow-capped peaks.
Feedback