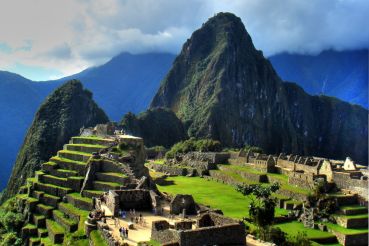 There are lots of places in the world where ancient civilizations’ monuments have remained till present days. Peru is one of the countries where you can have an opportunity to go for an exciting journey in the wake of ancient tribes. Here you’ll learn about the secrets of Inca Empire, about the cultures of Chavin, Nazca, Chimu, Huari, Moche, Tiwanaku and other civilizations which existed here in tough climatic conditions of highlands.

Pyramids, underground caves, statues, fortresses, mysterious buildings, remains of irrigation canals, signs of lost towns… Inca state appeared in the 12th century in the Urubamba River Valley. It grew rapidly and became the largest empire in the world within several centuries. It remained the strongest state until Columbus’ discovery of America. The Empire existed until it was captured by the Spanish conquistadors in the 16th century and the colonial period began.

Cusco is one of the most extraordinary towns of the world. It is the place where the capital of Inca Empire was situated during the time of its prosperous existence, on the height of around 3500 meters above the sea level. Lots of places remind of those times: the ruins of ancient fortresses built centuries ago, statues, narrow streets, roads and buildings’ foundations. It’s interesting to know that all of them were made of huge stones without any cement. A monument complex Saksaywaman among the best known sights is. The Empire’s religious and military centres were located here. A large fortress made of big stone walls which stands here still doesn’t need any repairing works due to its unique construction. What is more, the town was projected in the shape of cougar. Annual archaeological excavations bring more and more priceless findings. That’s why Cusco is called the archaeological capital of America.

Machu Picchu is one of the most mysterious monuments of Inca culture. Nowadays they are just ruins in jungle, but once it was a sacred Inca city. Lots of discussions about this town take place nowadays between scientists all over the world.

The Nazca Desert is situated in the southern part of the country. It is a 500 square kilometres stone plateau with strange pictures, painted in one solid line carved in stone. More than a thousand images of humans, geometric shapes, animals and birds can be seen here. The shapes of the pictures, created between 60 BC and 600 AD, are up to 40 meters and they can stretch on around 8 kilometres. Best of all they can be seen from the air. Some scientists think that some kind of flying machines had already existed at the time when the pictures were created. What were these pictures made for and in which way were they created? These questions are still left without answers…

Not far from the Nazca Desert, the Marcahuasi Plateau in the Andes Mountains is situated. It is one of the most unexplored corners of the world. A lot of rocks of unusual shapes and large pieces of granite depicting people and animals are located here. Even nowadays a great number of discussions between experts about the authorship and the purpose of such granite pieces take place all over the world. Were they formed just by the rain effect on stone? Were they made by humans? Or maybe this is the work of aliens?..

High up in the mountains, not far from the Bolivia border there’s wonderful Lake Titicaca. It was considered to be a sacred one during the times of Inca Empire. Local Indians still tend to build their houses, schools, churches not far from it. They also make some floating islands using cane as the foundation material for them. The Selva district is situated in the eastern part of Peru. This is the place of deep jungles, evergreen forests, which remained virgin till present days. The largest river in the world – the Amazon River – originally starts from here, too. Unique Indian customs are kept here with great honour. A great number of unexplored historical and architectural monuments are lost in these jungles. The ruins of the ex-capital of Chimu Empire – the Chan Chan City is also one the main tourist attractions here. The city is built of clay and stone. The Inca Trail is a popular and extremely exciting route which goes along the ancient villages and picturesque sceneries.

Peru fascinates and invites all the tourists who love adventures, mystery and the secrets of ancient cultures.

Ronda – a journey over the precipice

Being famous for its wide sand beaches and warm sea, Spain has always been a beloved destination of tourists from all over the world. But it’s not the only image the country can boast of.

The medieval spirit, romance, power of fortified walls, breathtaking scenery – everyone can dive into this peculiar gothic atmosphere. In Europe, tourists are offered to experience life of medieval novels’ heroes turning for a day into a host of a real ca

The Brazilian city of Rio de Janeiro incredibly scenic and very green. Looking at it from the coast, it seems that the city is literally carved in a lush tropical forest.
Feedback