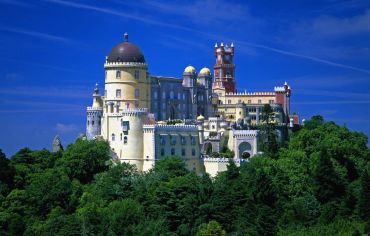 The medieval spirit, romance, power of fortified walls, breathtaking scenery – everyone can dive into this peculiar gothic atmosphere. In Europe, tourists are offered to experience life of medieval novels’ heroes turning for a day into a host of a real castle.

1. England
The biggest castle of Great Britain is located in Windsor. The rich history of Great Britain is reflected in this castle. Windsor Castle has always been the symbol of the Crown. Built more than 900 years ago, this magnificent place is still serving as a residence of the Royal Family. Another eminent structure is located on St Patrick Isle, which is connected with the Isle of Man by a dam. It is Peel Castle. Despite the fact only ruins of the castle have been left, you can feel the castle’s medieval charm. People say, a phantom or other supernatural beings can be seen within these picturesque ruins. Romantic people should definitely visit a small island located in Loch Duich, Scotland. It is Eilean Donan, a very elegant and one of the most romantic castles in Scotland.

2. France
The Loire Valley is the only place in Europe where castles can be seen at every turn. The majority of castles of the Loire Valley were built in the 16th century and therefore, they served mostly for entertainment and not for defense. Kings of France often brought here their mistresses. Dated 1519 Chateau de Chambord was originally built as a hunting lodge. Today, it is one of the biggest castles in the Loire. And the most romantic castle is Chateau de Chenonceau built over the arches spanning over the River Cher. It takes 45 minutes to come here from the nearest airport.

3. Scotland
Edinburgh Castle is situated in the middle of the country and is more than thousand years old. Among other castles in Scotland, it stands out by its rich history and amazing size. It was built on top of the granite wall 15 m high and surrounded by inexpugnable trenches on three sides. At different times the castle-fortress was inhabited by almost all kings of the country. Today, the castle is used for official international receptions and the other time it is open for visitors.

4. Italy
The luxurious Castello Monastero is located in the heart of the picturesque Valle d’Ombrone. The castle was reconstructed in 2009 and now, the rooms have a contemporary look filled though, with the spirit of the medieval traditions. Everything is breathing here local coziness and charming elegance. On the territory of the hotel there are 2 restaurants, a swimming pool and a recreation centre. Castello Monastero is about one hour drive from Florence airport and within 2 hours drive of Pisa.

5. Spain
El Castillo de Buen Amor is located between the province of Salamanca and the province of Zamora. Its walls look like inexpugnable fortress, though its rooms are real romantic paradise. History and modernity are entwined in the castle architecture applying a special charm and uniqueness. For example, the walls of a cosy room are decorated with hunting trophies. And a neighbouring room is armoury with armour. The castle is just 30 minutes drive from the city of Salamanca.

The Brazilian city of Rio de Janeiro incredibly scenic and very green. Looking at it from the coast, it seems that the city is literally carved in a lush tropical forest.

Where the spring is born. Provence

It’s quite hard to find more romantic country than France. Everywhere you feel love and unbridled desire to live enjoying every day. Spring in Provence is especially beautiful.
Feedback