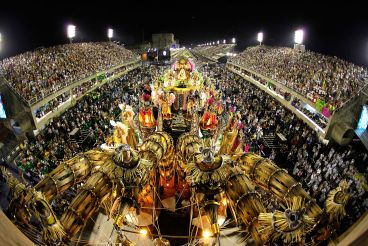 The Brazilian city of Rio de Janeiro incredibly scenic and very green. Looking at it from the coast, it seems that the city is literally carved in a lush tropical forest. On the one hand surround Rio rocks and on the other - an endless blue ocean to the famous Copacabana coast.

During the carnival in Brazil chained interest of the media and the international community, it is the big event in our planet. Carnival days in Brazil declared a national holiday and a state holiday.

The main show takes place on the country's "Sambadrome" - a special stadium with and lodges. There are competing the best Brazilian samba school. Each school chooses a carnival before his speech to certain subjects and observing her, draws decorations, decorate and designing costumes. Participants compete among themselves as in dance and in the original costume.
Thousands of tourists watching from the carnival, but not many people know that if you want anyone can participate in a grand action. You need to buy a suit at a school-winners, though, the price can range from $ 200 to several thousand. The participant does not require much: wear a suit, go to the system and at least minimally to move her hips in time with clockwork rhythms.

The grandest event of the year, he carnival takes place at night. And not surprisingly, heavy and bulky suits in the intense heat participants not survive long. Besides, it is designed for all to produce the maximum effect on the viewer. For this - unceasing volleys salutes platform decorated with myriads of bright lights, and the most beautiful girls in Brazil, seductively moving to the rhythm of the samba. Looking at such magnificence remain indifferent impossible legs themselves are beginning to move to the beat of music. By the way, a long tradition of all music carnival samba only - national rhythms that were born here in Brazil.

Viewers affects not only the beauty of the action, but also its magnitude. It seems that all Brazilians come to the carnival night to indulge jolly. The show lasts about 8 hours. Each samba school dances under their flags about an hour. And after a while all schools merge into infinitely diverse and dancing series of people who are having fun until dawn. So if you've decided to watch the parade to the end, on the eve of you should get some sleep.

Brazilians except carnival and football, there is another national treasure. They love to watch soap operas, and both women and men. So do not be surprised if you happen to notice a cafe noisy company, which is not much discussion of the last match, and favorite characters and their feelings.

Good rest after the carnival necessarily go to the most important tourist destination Rio - Copacabana beach. He is depicted on all photos, tourist guides and brochures. And in movies and commercials about Brazil you will definitely see Pure bending Copacabana. Despite the fact that the best coast of Brazil is quite broad, it is always very crowded. Someone tans or bathed, someone playing football, ping pong or beach volleyball, or someone dancing samba, capoeira or right on the sand. Focuses on the beach the whole life of the city.

Tourism in Rio you will seem like a fairy tale, this is a case where even a couple weeks of vacation will surely be enough. City bright, cheerful and different so much that just can not get bored.

Driver's notes: the most dangerous roads in the world

Wise men say, the distance is not the problem, it’s the condition of the road itself.

Seychelles - an island nation, uniting more than one hundred islands in the Indian Ocean, located near the equator and the coast of Africa.

Summer is over, but that's no reason to be sad. On the contrary, in front of the velvet season - a time when the sun does not burn its rays, when the water is still warm and the sea with a fresh breeze blowing. The fall of many of the world resorts ar
Feedback